I’m sometimes asked what should one do to get likes on their Facebook posts and Pages. Well, here is a Case Study showing how dislikes might also help 😉 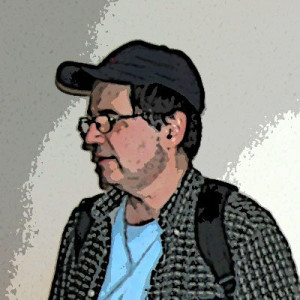 I have seen many instances of established companies’ Facebook pages where a social media team blithely grind out breezy PR babble, only to see the Comments and Replies on these posts resemble a cauldron of bitter humanity.

Strangely enough, it can be quite entertaining, and it might even provide benefit to the company or politician as supporters and detractors battle it out.

This generates passion which can effect a positive result.

I have recently experienced this heat supporting my pick for the next President of the United States, Sen. Bernie Sanders.

I had been posting items on my personal Facebook page, both public and view-able only to Friends and eventually commenting on posts from the New York Times, Rolling Stone, The New Yorker and other Facebook sites with a heck of a lot more Views.

Boy, did that unleash some demons! 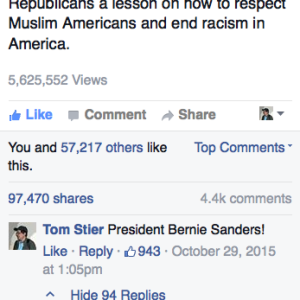 I had now left the protective cocoon of my Facebook friends and entered a world of decidedly different viewpoints. For instance, on the right is a screenshot of my rather innocuous comment on a post on Bernie’s main Facebook page. As you can see, my comment has 943* Likes (some of my other Posts have hundreds of Likes, so I’m rounding up to a thousand ;)) and 114 Replies.

The Replies to my Comment generated quite a bit of heat as supporters and detractors posted replies, when at one point the thread devolved into 2, and then 3 individuals getting very very personal and attacking each other in their replies.

At various points in this 114 reply thread I would add my own blithely positive interjections, gathering more Likes, and further inciting the detractors.

At the apex of the most heated personal attacks I posted a cheery “And Now A Message From Our Sponsor.  President Bernie Sanders! ” garnering Likes even from some of the combatants!

Now, you may question if this activity accomplishes anything. I do see Sanders is gaining in some polls, but don’t have access to any data the Sanders campaign may be gathering from their social media efforts.

I like to think that my tactics in supporting something I believe in are maybe very slightly bringing a positive consciousness in the minds of  folks that happen to see my posts…and laugh.

Tom, I will enjoy trashing your infrequent emails!